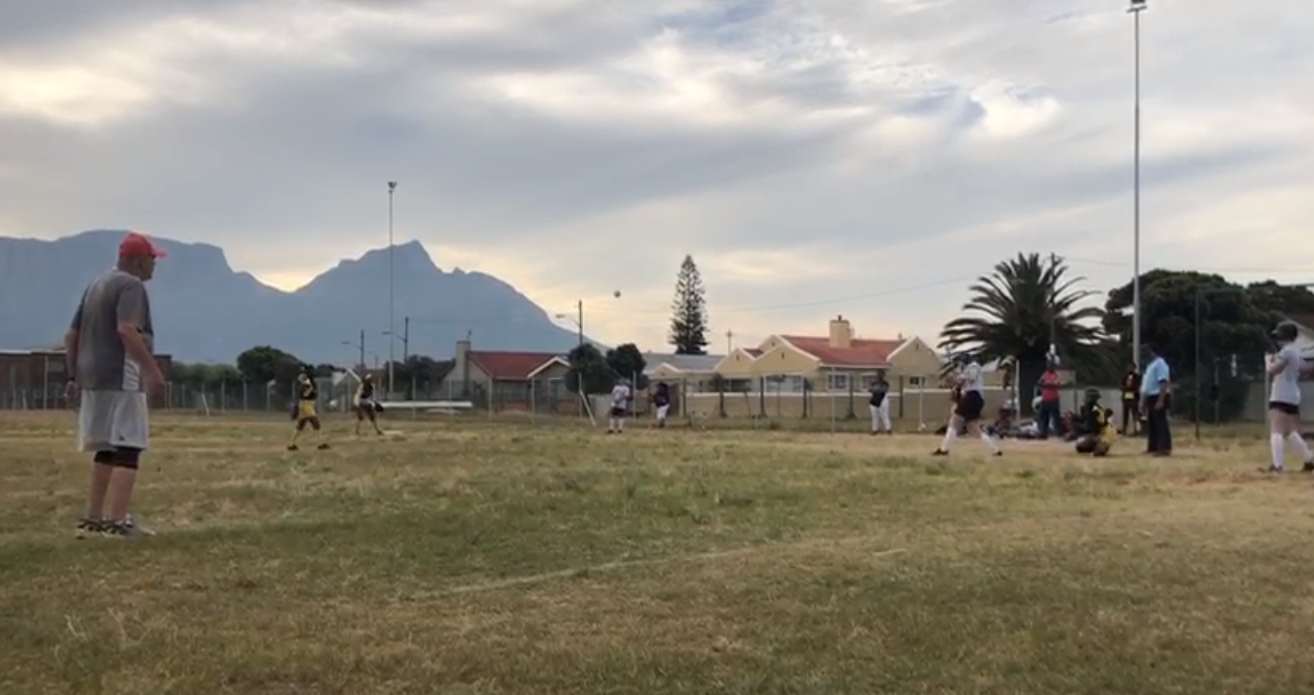 Why we played these opponents for the second time in only our fifth match is an anomaly, but we were happy to reverse the previous result. A boisterous crowd of spectators raised the atmosphere and made the victory that much more fun.

With our regular pitchers unavailable, it was Deirdre (Bernie), to the rescue after more than a decade out of the game. She started the pitching only to find the backstop an easier target than the strike zone. Then redeemed herself when moved to centre field and eventually became an instant celebrity in the final frame when she hit safely and advanced with confidence to score the winning run; converting her earlier vociferous critics on the sidelines to supporters.

Jamie (Bokkie) took to the rubber after the second batter with some temerity yet never lost heart for her first win in the second league. She was well supported by her field in a crucial first innings, noteworthy for a bullet throw from left fielder Jodi (Magnum) to catcher Shaunal (Haggis) who made a brilliant tag for the out at home.

We hammered in six runs in our first batting turn, Sian (Sheena) going deep. That should have been just the start of a landslide, but after that we stuttered away at the plate until Bokkie’s long drive in the penultimate frame cleared the bases allowing her to be ambitiously stranded for the comedy act of the day.

Batman (Farah) and Nightingale (Gadija) were their usual competent selves while JohnFred (Iman) and Manisha (Lollipop) also did their bit to make for a fine win.

As the second strongest team in the league, we were expected to run the powerful Lavender Hill team close. Instead we threw in the towel from the start, our best players looking out of their depth.
It was left to the lesser lights to show some fight, Lisa twice drawing walks and stealing second, Zahra not backing off and swinging the bat with intent. Nawaar was the only batter to hit safely. 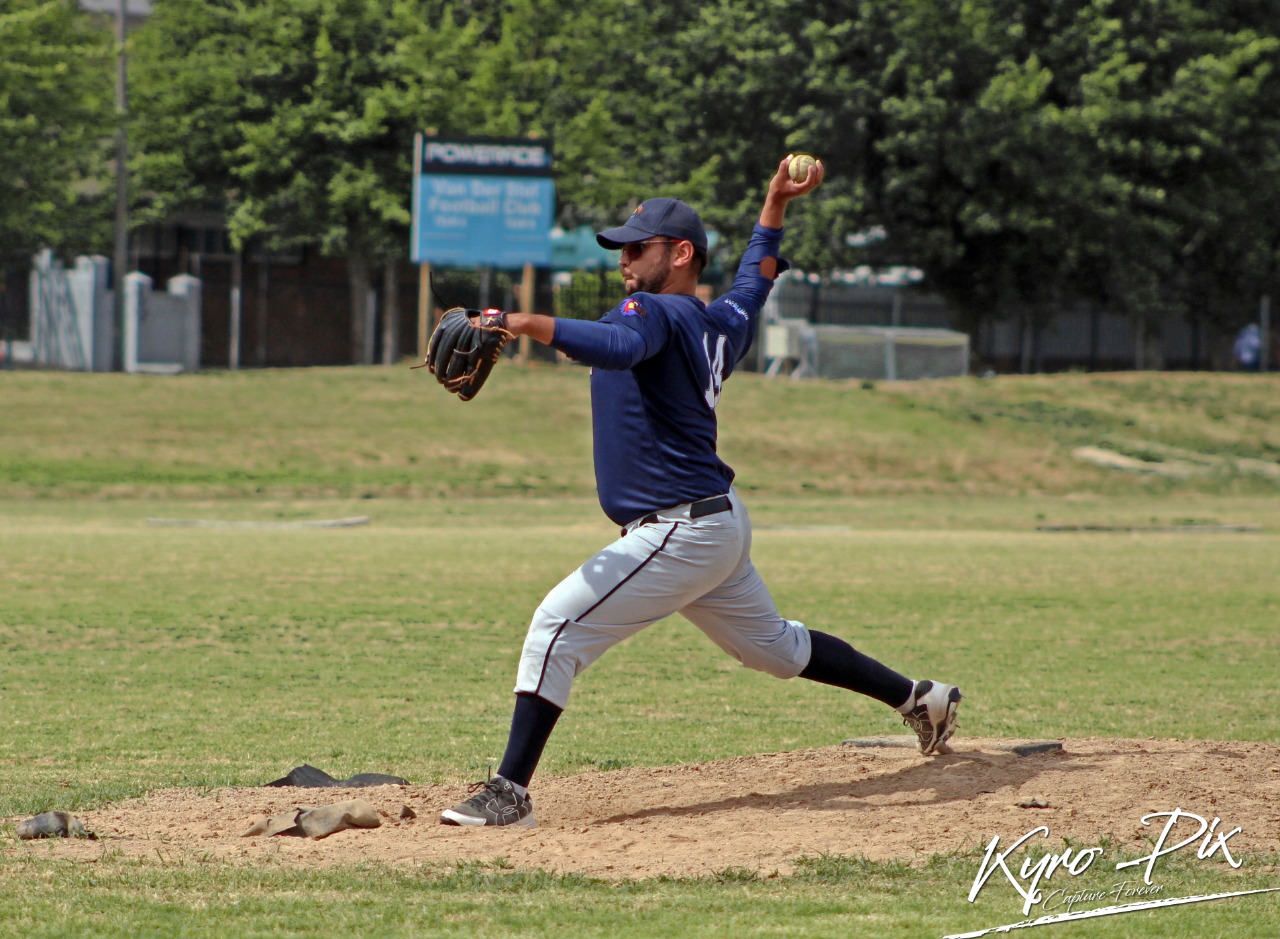 It was another tough day at the park for the VOB reserves succumbing to 17-4 to Van Der Stel in the blistering Stellenbosch heat in 4 1/2 innings.

It was a game where VOB never got going. They had many scoring opportunities that they could not capitalise on getting the lead runner on base in every inning, VOB only managed to accumulate 4 runs mainly via the bats of Matthew Darius (3-3,2R), Jordyn Riffel (2-3,R,RBi), Jaryd Riffel (1-1,2RBi).

Defensively VOB once again struggled as 18U pitcher Kian Africa battled adjust to the umpire’s strike zone. A tough outing for him, but one that offers a valuable lesson as he get more exposure at a senior level. He wasn’t helped by the field though as VOB fielders didn’t take the chances that came their way. Africa was replaced in the 3rd inning by Kevin Mullins who wrapped up the inning. In the 4th inning Mullins battled on the mound. The ever reliable Matthew Darius was then called upon to close out the 4th inning.

VOB have a lot of work to do over the next 2 weeks if they want to get back to winning ways when the league resumes in 2 weeks’ time.

No Comments 2018 11 03From the DugoutMajor League Reserve 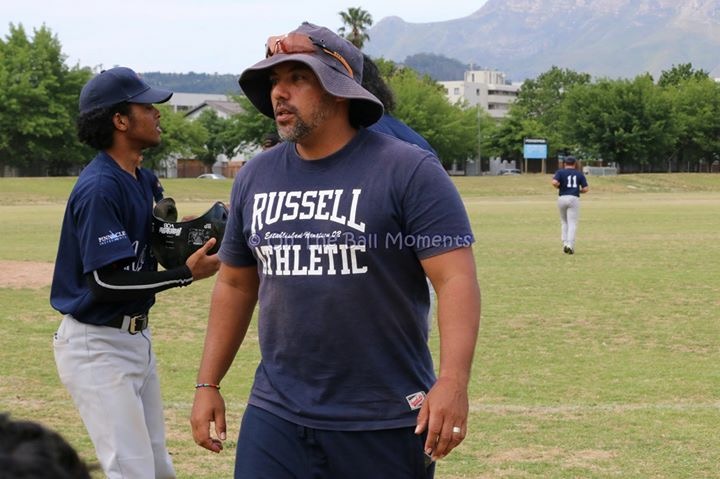 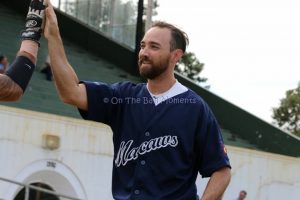 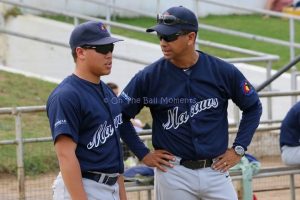 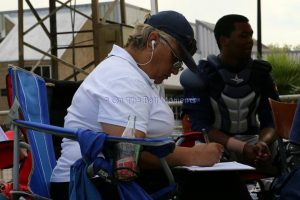 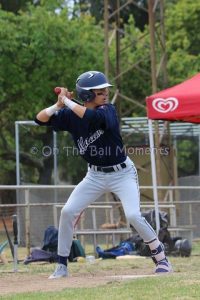 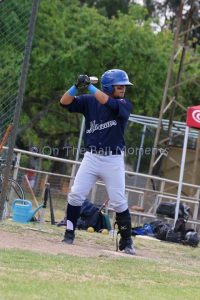 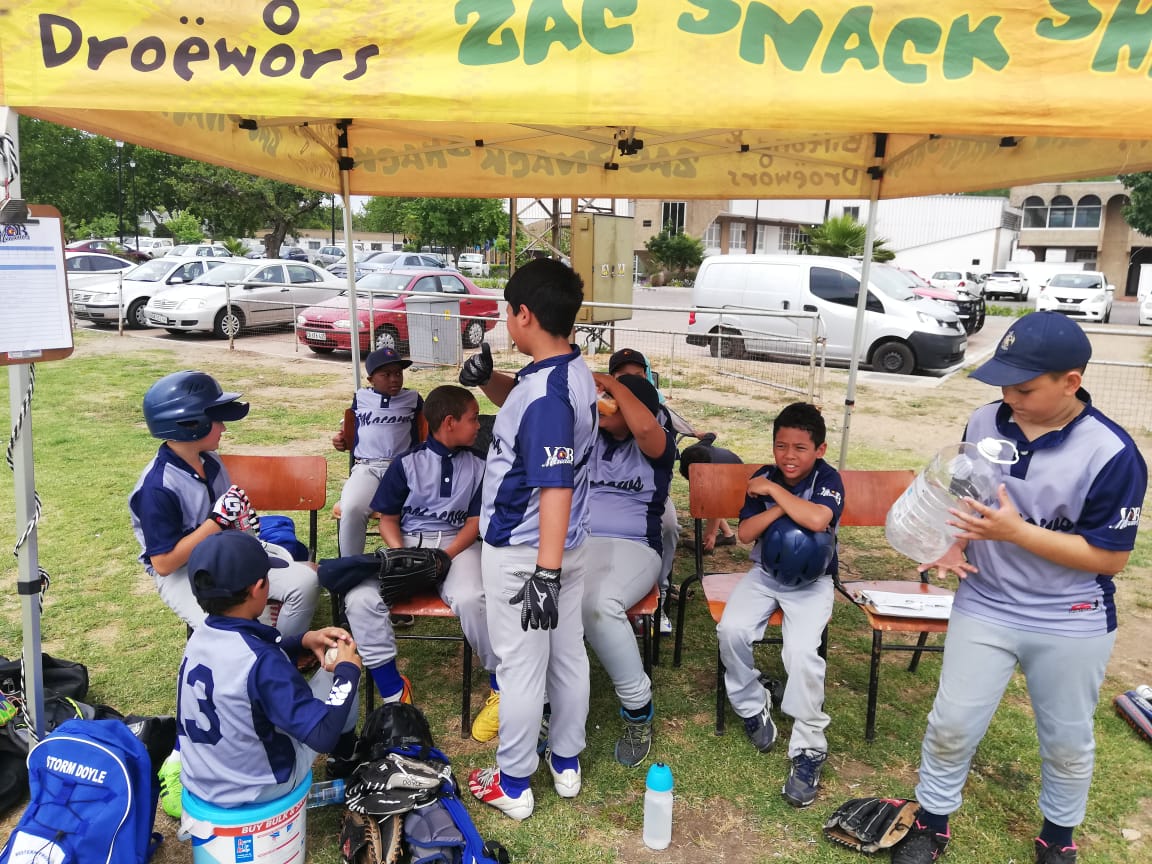 The start of a journey. 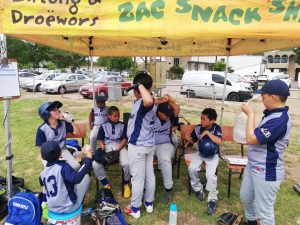 For me yesterday’s game was a watershed moment for the “the kids”. In every thing that happens in life comes from an action or a trigger. Yesterday it came from (to the naked eye an unlikely source) by chance because he was having a sleep over by a buddy and had to come to training with him… MO Maseko.. 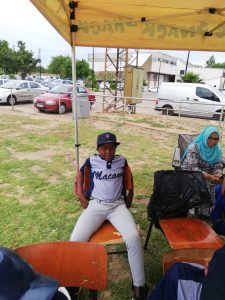 Leading off the third inning down 1 nil, MO drills the first pitch dead center way over the center fielders head that to me would have been an automatic home run and he legged out a triple. This action caused a raucous moment which “the kids” capitilised on and rode the wave with two more doubles( Talun and Jaedon) and a triple by catcher Nur Scello. All three of these hits were drives to right center. This had the supporters on the grandstand going crazy.

The real positive about this game was that we went down twice in the game and each time we fought back and took the lead. This shows the fight that these kids have. We had great pitching in really hot conditions from Jaedon and Talun. Jaedon with 3 innings 4 K’s 5 hits no walks. Talun 2 innings 1 bb and 1 k.

We had great baserunning and really good fielding whilst only making one error. “the kids” are figuring it out and the step from u10 till now is slowly diminishing. Out of my years of coaching I will admit that this process from taking tee ballers to u12 is hard. But we must all remember that it is a process that we need to understand. We cannot miss steps in the process. And we have to trust the process that we are giving to the kids. 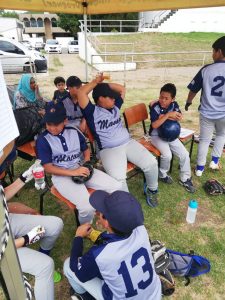 And in saying this I believe that we have a great group of u12s coming through (and I am including some of the U10s that we have as well. The future is bright guys. Myself and Coach Jean are excited to be leading this process. But it’s not just us, we have had a great support staff.

I firstly would like to thank the amazing parents we have. You guys have been awesome. On the coaching part we have had instruction from u18 coach and catching expert Andrew Ball as well as senior player Lance Gordon. And parent help in the bench in Stanton and New masters shirt stop Alun. We appreciate it immensely.

Last point but I think it’s the most important one. I know that kids develop better when watching baseball and living it. Yesterday was a lovely example of our kids hanging around after they play and enjoying the day together. Playing in the cages, throwing bull pens, watching the games running around the stadium. Watching. Ire games. Talking to each other about their favorite senior players. They are starting to live the game. And that is where the real development happens. Not at training. But together learning fro. Each other and talking the game.

On that I say thank you to the parents again for allowing the kids to stay at the field after their game. Coach Paul and Coach jean 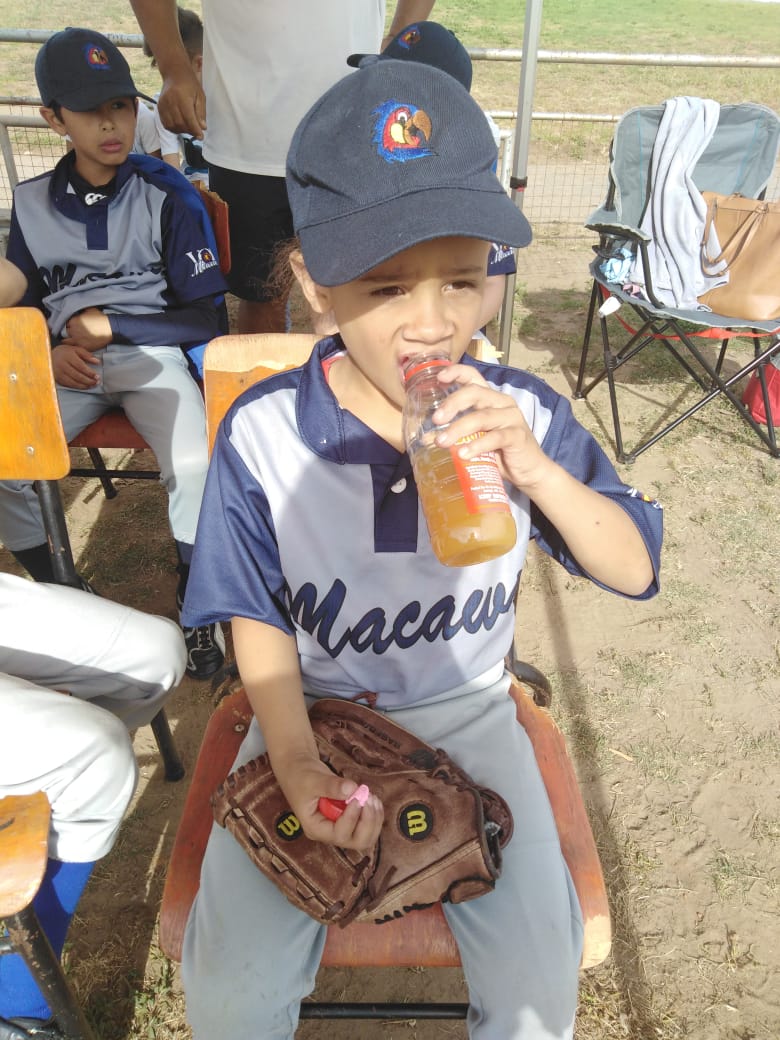 The U10’s played Van der Stel on Saturday in very hot conditions and won the game 37 – 22.

Both teams from the u12 boys fielded in the u10 game due to shortage of players namely Caleb Bell, Storm Doyle and Mo Maseko. Our batting was on top with the boys getting on bases.

It was a well deserved win in the blistering heat. 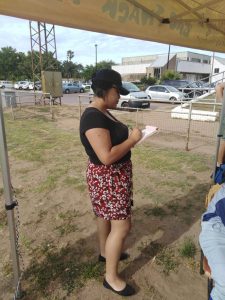 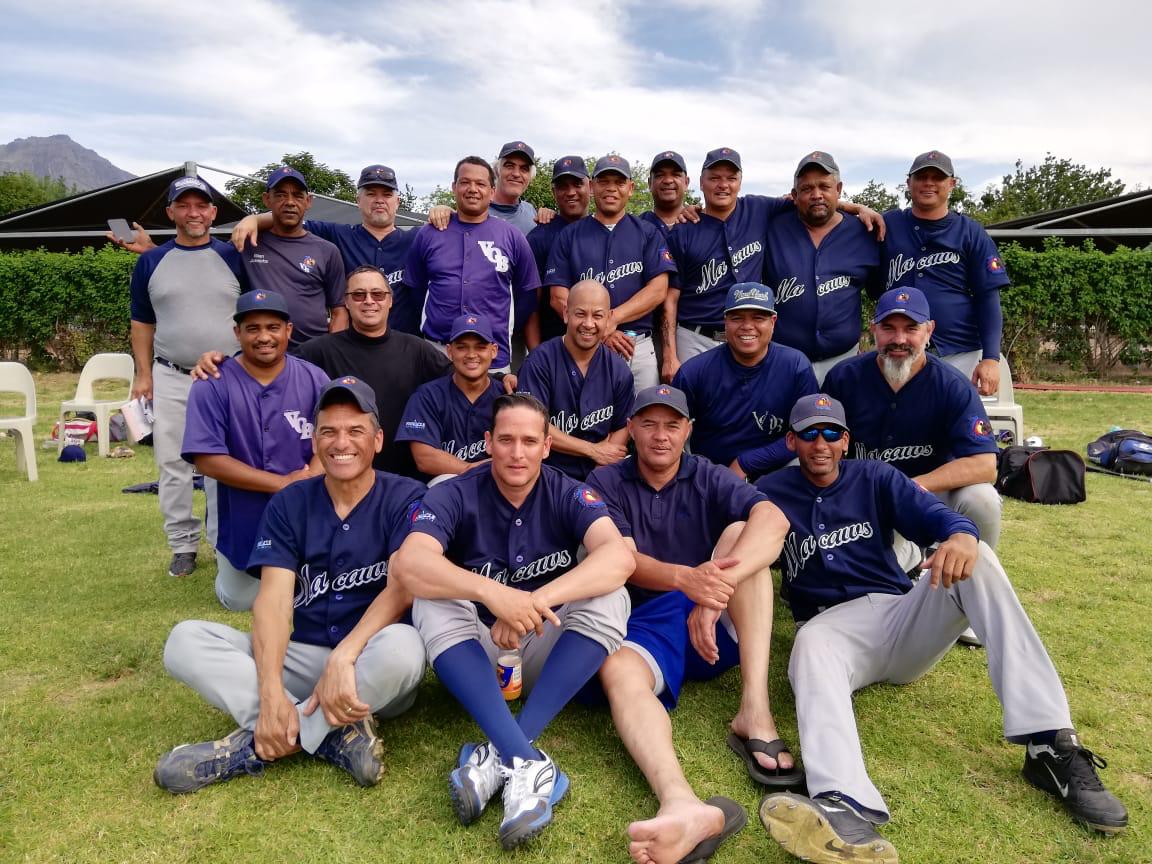