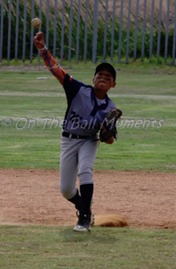 A game dubbed, by the players, as “the biggest for the season” saw an almost full training squad, grinding on both Wednesday & Friday training sessions to work off the festive season eats…
Although still in holiday mode, there had been quite a bit of excitement leading up to this game as A’s have only had 1 loss for the season and are considered to be 1 of the strongest teams in the u15 league.
Due to a mishap on A’s “B-field” which was scheduled to host this clash, the game had to be delayed by 30mins. This seemed to have put our kids in a very relaxed mode. So relaxed that in the 1st frame, 1 of them forgot to bat. Unfortunately, the beginning of the game was no different to majority of their games for the season with the kids only waking up in the 3rd & 4th frames and by this time, they were already 6-1 down. A quick pep-talk and some serious motivation from their adoring fans behind 3rd base/home plate and they manged to find the “ON” switch.

WOW…..what a turn around. These kids decided to play VOB baseball…and then some! Taking advantage where ever they could to get runners on and move the runners over that by the time it was side away, the coach was so excited that he didn’t even realize they had gone ahead by 1 run. This meant there were just 3 more outs that had to be made to end the ballgame but it seemed like the excitement got the better of the players and after a few “brain-farts” had found themselves with 2 outs and runners on 2nd & 3rd base but then managed to dig a little deeper and get that last out for the win.
If this is what these kids are capable of while still in a very relaxed holiday mode, I can’t wait to see what the rest of the season has in store.
Good luck to the boys taking part in the District tournament this weekend…go make us proud!